TRUE TO FORM, SMOTHERS BROTHERS CELEBRATE 50TH ANNIVERSARY OF THEIR FIRING FROM CBS

Getting fired from work is not usually a cause to celebrate.

Unless you’re the Smothers Brothers.

The duo has stepped out of retirement to commemorate the day 50 years ago when CBS cancelled their show over their controversial humour. 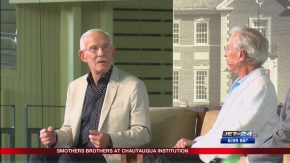 Tom and Dick Smothers reunited on Monday for several appearances at the National Comedy Center in Jamestown, New York.

The two discussed their firing in an onstage discussion and later unveiled a display of archival material they donated to the centre, including their iconic red suit jackets, Tom’s guitar and Dick’s bass, scripts and creative papers, and legal documents.

The brothers weren’t allowed to use the phrase “sex education” or joke that someone was “a known heterosexual.”

Dick Smothers says the humour may have been benign, but it was volatile at the time.