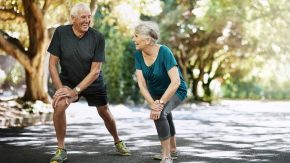 Researchers at Massachusetts General Hospital evaluated the amount of a protein called beta-amyloid (a sign of Alzheimer’s) in some 180 older adults.

None began with any symptoms of dementia or cardiovascular diseases, including stroke.

After measuring a baseline beta-amyloid level using a PET scan, the researchers then monitored physical activity by having the adults wear a pedometer for seven days and measuring the daily average number of steps.

The people most at risk for cardiovascular problems had quicker rates of decline in cognitive scores and gray matter volumes all through the test, no matter what their baseline physical activity was.

You can read about the research in JAMA Neurology.