Ridership on Toronto’s bike share network has been breaking records so far this year and now, the system is breaking new ground.

The city of Toronto announced today that they’re adding 105 new bike stations and 1,250 bicycles to the network. It’s part of the city’s plan to expand the network outside the downtown core. 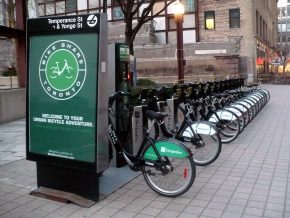 94 of the stations are already online and the rest will be up and running by Monday, July 15th. The new bikes means there are 5,000 available around the city.

Many of the stations will be near TTC subway stations. The aim of that is to get people to use bikes to finish or start their trips, linking up with TTC services.

In announcing the expansion, the city boasted big numbers like a record 85,000 trips taken the week of June 30-July 6. That makes it the busiest seven-day stretch in the system’s history.

“It is setting records and I think this is an indication that this expansion is warranted,” said Tory. “The continued confidence in this program is warranted and it reflects the success of the program.”