It seems the Ontario Liberal Party is making sure there will be a Canada Day event at Queen’s Park, after all. 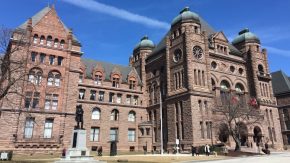 The provincial government announced last week that they were cancelling the annual Canada Day celebrations at Queen’s Park. They had been held every year for the past 52 years and often featured a 21-gun salute and citizenship ceremonies.

The government cited declining attendance in announcing the cancellation. They offered free admission to the first 500 people to a number of attractions as the replacement.

The cancellation came after Premier Doug Ford was booed by tens of thousands.at the Toronto Raptors victory celebration on June 17th. Premiers have traditionally made appearances at the Queen’s Park event.

The Liberals have stepped in and will host a Canada Day picnic called “The People’s Picnic.”

Toronto MPP Mitzie Hunter helped spearhead the event that will stand in place of the 52-year-old Queen’s Park celebration.