Ontario’s Premier has cancelled Canada Day celebrations on the lawn of Queen’s Park. Instead, Doug Ford is offering free admission to a number of attractions across the province on Canada Day, Monday July 1st. 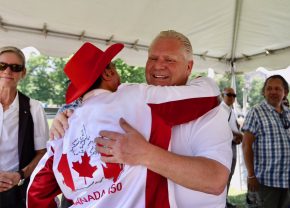 The premier’s executive director of communications says, “For the first time ever, the Ontario government is helping hard working families celebrate Canada Day by offering free admission to the first 5-hundred visitors at 10 different Ontario agencies and attractions. So instead of hosting a single event at Queen’s Park,” says Laryssa Waler, “the government is providing free admission for thousands of people to Canada Day events across the province.”

There’s a report that the decision to cancel the Queen’s Park event was made months ago.

The celebration at Queen’s Park has been a tradition for over five decades. The first event took place on Canada’s centennial birthday in 1967.

The free celebration usually includes a 21-gun salute, and a number of activities for families. In past years, citizenship ceremonies to welcome new Canadians have also taken place. The premier traditionally attends.

Admission for the first 500 visitors on July 1 will be offered at the following locations:

Among the responses, Liberal MPP Mitzie Hunter has tweeted, “Nobody cancels Canada Day. The people have a right to expect that the government of the day can plan a celebration that honours the founding of our province and country. The Ford Conservatives are in complete chaos.”