A funeral mass is planned today for prolific Canadian character actor Sean McCann who died last Thursday at the age of 83. 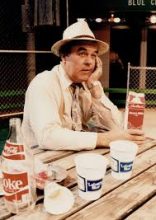 The award-winning actor was know for his role as Lt. Hogan on the TV series “Night Heat.”

He also played William Lyon MacKenzie King in the 1988 move “The King Chronicle” and played supporting roles in movies like 1995’s “Tommy Boy” with the late Chris Farley..

McCann was born in Windsor and studied to become a priest before turning to acting in the 1960s.

The family requests memorial donations be made to the Actor’s Fund of Canada.