TRUDEAU AND TRUMP TO MEET IN WASHINGTON OVER CHINA

Prime Minister Justin Trudeau and U.S. President Donald Trump are expected to discuss their shared challenges with China when the two leaders meet in Washington next week. 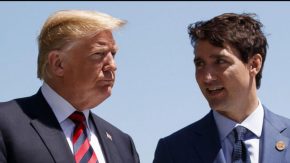 Thursday’s meeting will give them an opportunity to discuss strategy ahead of the G20 leaders’ summit in Japan at the end of the month, when they’ll have face time with Chinese President Xi Jinping.

In apparent retaliation, China has detained two Canadians, has sentenced another two to death, and obstructed shipments of Canadian agriculture products such as canola and pork.

Following two days of meetings in Washington ahead of Trudeau’s visit, Foreign Affairs Minister Chrystia Freeland says all Canadians around the world could be less safe if Canada bowed to China’s demand. She says it would set a dangerous precedent if Canada allowed external pressure to alter its behaviour on honouring an extradition treaty.