NDP MPP Gilles Bisson is being chastised by the Ford Progressive Conservatives for comparing them to the Nazi’s Director of Communications Joseph Goebbels. 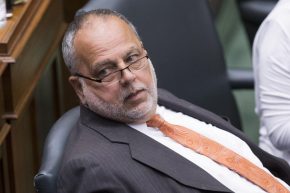 Bisson made the reference to the Tories’ claim that putting beer and wine in corner stores would create 9100 new jobs, pointing out the Nazi propagandist said “if you say something often enough and loud enough eventually people will believe it.”

PC MPP Stephen Lecce responded by saying “MPP Bisson’s comments are repugnant and a trivialization of the systematic murder of 6-million Jewish people at the hands of the Nazi regime.”

Lecce of course is right, but the PCs are not getting out of this unscathed. PC MPP Daryl Kramp once made the same reference, suggesting the Liberals’ green energy plan was being sold in a way that would have made Goebbels proud.

He, like Gilles Bisson, issued an apology for the reference.

A National Post report says all parties have made references to Goebbels over the years as a way to discredit their opponents. In fact, Gilles Bisson has apparently made the comparison three times, including in 2012 and 1999.