New footage of The Beatles’ only live appearance on the BBC’s TV’s Top of the Pops in 1966 has been discovered in an attic. 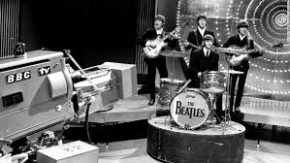 The 92 second clip was recorded as the Fab Four played “Paperback Writer” although there is no sound in the clip.

David Chandler was a teenager when he used a wind-up camera to record the performance in June of 1966 and remembered it after hearing about a shorter snippet found of a “Top of the Pops” Beatles’ performance in Mexico last month.

The find also includes nine minutes of other Top of the Pops performances by the likes of Dusty Springfield, The Hollies and a young Tom Jones belting out “Green, Green Grass Of Home.”

An August of 1966, just two months after their Top of the Pops performance, the Beatles played their final live gig in San Francisco.