Kawhi Leonard is officially King of the North!

Ahead of the NBA Championship final, artwork of the Toronto Raptors’ superstar is sprawled across the side of 50 Pembroke Street in Regent Park. 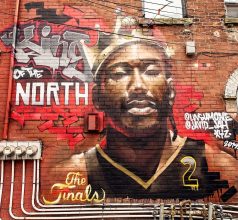 It shows a close up of Kawhi with a crown atop his head and the words King of the North and The Finals.

“A good friend of ours told us about this wall and pulled it together and we wanted to show love to Kawhi but also keep it ‘street’, keep it true to the fact that it’s a public artwork, so it has a kind of graffiti vibe to it,” said co-artist Javid Jah.

After seeing it on social media, people have been coming by to take in the impressive piece of art as we await the start of the final NBA series with the Golden State Warriors which begins Thursday night at 9 at Scotiabank Arena.