FUTURE OF YONGE STREET DOWNTOWN COULD BE CAR-FREE

King Street has become more pedestrian friendly, but there is now a push to make Yonge Street downtown, easier to get around for pedestrians.

The water mains under downtown Yonge Street need to be replaced, meaning the street has to be dug up. So city planners want to seize the opportunity to redevelop a stretch of the iconic roadway with a view to making it more pedestrian friendly. 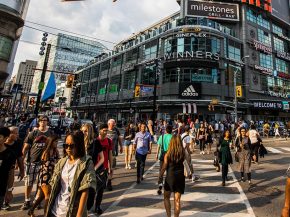 According to a new environmental assessment report from the city, some 238,000 people walk the sidewalks of Yonge Street between Queen and College Streets over 24 hours on an average summer day. Up to 75 percent of people using Yonge are pedestrians, and over the last 20 years, walking has doubled while driving has decreased by 17 percent.

One of the ideas being considered is wider sidewalks along Yonge. Public consultations have also pointed to the need for a better streetscape with more greenery. In fact, six possible alternatives have been introduced, including making Yonge downtown “car free”.

Upcoming public meetings will be held in November and then next spring, after which more detailed plans will begin.