The actor who played the fearsome wookie Chewbacca in the “Star Wars” films has died. 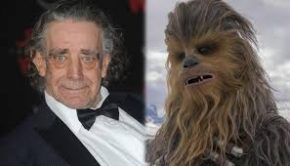 Peter Mayhew died at his home Tuesday in Texas at the age of 74.

Mayhew played the 200-year old shaggy, towering sidekick to Han Solo in the original “Star Wars” trilogy, as well as 2005’s “Revenge of the Sith.”

Mayhew was born and raised in England. He had just one film credit and was working as a hospital orderly in London when George Lucas found him and cast him as Chewbacca.