As flooding continues across Muskoka and into the Ottawa area, the Ford Government at Queen’s Park is coming under fire for a 50% reduction in flood control funding to the province’s Conservation Authorities. 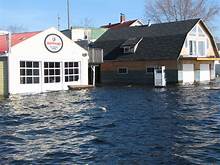 Green Party Leader Mike Schreiner says it is bad environmental policy from the government.  NDP and Opposition Leader Andrea Horwath backs that up, saying that killing a program that plants 50-million trees in the province will only make things worse.

To that end, Environment Canada predicts an additional 20 to 40 mms of rain across the Muskoka Region and Northumberland County by tomorrow night. However, water levels did begin coming down in the Huntsville area yesterday.

The Premier won’t be at Queen’s Park today to hear any additional criticism.  He and Finance Minister Vic Fideli are in New York to meet with leaders from such international organizations as the Bank of Japan, N-B-C Universal, housewares retailer Wayfair and Weight Watchers.