The Prime Minister is taking aim at the Ford government saying the province is delaying important infrastructure projects because it doesn’t want to work with the Federal Liberals. 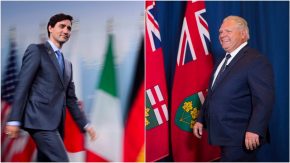 Speaking on Tuesday, Justin Trudeau warned that Ontario may miss the summer construction window as a result of this reluctance.

The Progressive Conservatives last week announced a $28.5-billion plan for four transit projects in the Toronto area, which it expects the federal government to contribute to.

However, Trudeau says Ontario has yet to say which projects, including transit, it wants to partner with Ottawa on.

He added that the provincial government is letting the people of Ontario down, while urging them to come to the table to discuss what projects require collaboration.