WEAR BLUE AND WHITE MONDAY FOR THE TORONTO MAPLE LEAFS

Today is Blue and White Day in Toronto. Mayor John Tory is encouraging us to wear the colours of the Toronto Maple Leafs who play game 3 of their first round playoff series against the Boston Bruins Monday night. The best-of-seven NHL series is tied at a game a piece. 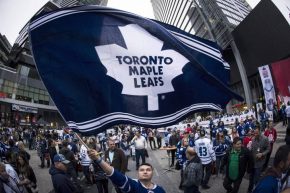 Mayor Tory took part in a special flag raising ceremony outside of Toronto City Hall on Friday with representatives of both the Leafs and Toronto Raptors.

Saturday was Raptors Day, when unfortunately the Raptors lost their opening NBA playoff game against the Orlando Magic. Game 2 is tomorrow night at Scotiabank Arena.

The Leafs and Raptors flags will fly at Nathan Philips Square for the duration of the playoffs.