The C-N Tower and Niagara Falls will be lit in green on Sunday to mark Canada’s first Green Shirt Day. 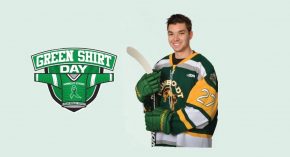 It’s a day to promote organ donation on the first anniversary of the death of Humboldt Broncos’ player Logan Boulet.

Shortly before he was killed in the Saskatchewan hockey team’s bus crash, Boulet signed up to be a donor.

Six people benefited from his organs, but his selfless act is being credited with changing the landscape of organ donation in Canada and creating the so-called Logan Boulet Effect.