Ukraine’s former prime minister, who polled third in the nation’s tight race for the presidency, claims that the incumbent president rigged the results in his favour. 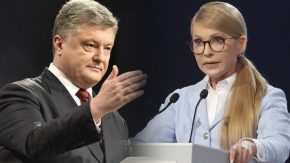 Yulia Tymoshenko said at a news conference Tuesday that President Petro Poroshenko, who finished second beating Tymoshenko by fewer than 2 percentage points, falsified the vote in his favour. But she says she will not contest the results as she believes the courts are also controlled by the president.

With nearly 99 per cent of the vote counted, comedian Volodymyr Zelenskiy leads the race with 30 per cent.

That means that Ukraine’s new president will be elected in a runoff between Zelenskiy and Poroshenko later this month.

Tymoshenko was leading in the polls just a few months before the election.