The only woman director to emerge from France’s New Wave ccene in the 1960’s has died at the age of 90. 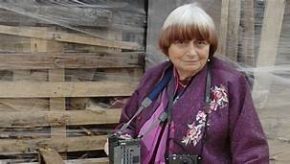 Agnes Varda had been battling cancer.

In her final interview with the BBC, Varda said she switched from being a photographer to a movie director because of the freedom that film offered..

Varda was seen as the arty, eccentric “grandmother” of French cinema. She worked right up to the end of her life, with a new autobiographical documentary premiering at the Berlin film festival just last month. She was still giving media interviews last weekend at an exhibition of her artworks.

last November, Varda was awarded an honorary Oscar for her documentary “Faces Places.”