The actress who played Bond girl Tilly Masterson to Sean Connery’s James Bond in the 1964 blockbuster “Goldfinger” has died. 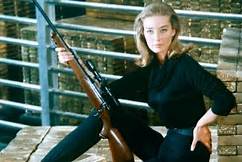 Tania Mallet, was a cousin of Dame Helen Mirren and was working working as a model when she was cast in the movie.

The role ultimately saw her slain on screen by the steel-rimmed hat of Goldfinger’s henchman Oddjob, despite Bond’s best efforts to save her.

Dame Helen described Mallet as a “loyal and generous person.”