Almost two months of scandal appear to have eroded support for Prime Minister Justin Trudeau and his governing Liberals.

A new Angus Reid poll suggests the Liberals are losing support to the other parties, while the Conservative vote stays solid. 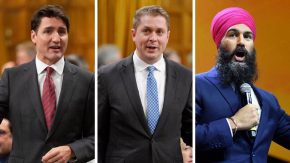 37 percent of those polled say they favour the Andrew Scheer Conservatives, 28 percent support the Liberals, 17 percent like the Jagmeet Singh New Democrats and 8 percent like Elizabeth May’s Green Party.

Jody Wilson-Raybould yesterday submitted to the Commons Justice Committee a written statement, including emails and text messages related to the SNC Lavalin affair.

The former attorney general also says she supports calls for an investigation into leaks to the media about the most recent Supreme Court appointment, saying that could compromise the integrity of the process.