The life and times of Sir Paul McCartney are back in the spotlight. 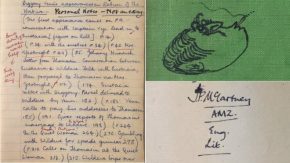 A Paul McCartney school book that the 76 year old music legend used for his English Literature lessons at Liverpool High School for Boys has sold for more than $60-thousand after two fans got into a bidding war.

That was nearly ten times its estimate.

The book contains 22 pages of essays by Sir Paul when he was a teenager and also features a doodle of a man smoking.

It should be noted McCartney received a B++ grade for an essay on John Milton’s epic poem “Paradise Lost.”

The auction, just outside Liverpool, also saw a Cavern Club brick being sold for about $500 and an Abbey Road sign fetched slightly more than $5-thousand.