THE 'INDY' OF THE ART WORLD STRIKES AGAIN

The Dutch sleuth known as the “Indiana Jones of the Art World” has made another major recovery. 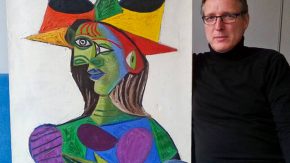 Arthur Brand has recovered a painting by Pablo Picasso 20 years after it was stolen from a wealthy Saudi’s yacht which was anchored in France at the time of the heist.

Brand told reporters in Amsterdam this morning that he knew right away the painting was a Picasso because there was some “magic coming off it.”

Brand says he took possession of the 1938 painting “Buste de Femme” after trailing it through Amsterdam for years.

The painting is estimated to be worth $28-million.

Brand’s previous finds include a 1,600-year-old missing mosaic and a Byzantine-era depiction of St. Mark that was stolen four decades previously.