It’s been almost 70-years since the record business was changed forever when RCA introduced the seven inch vinyl disc known as the 45. 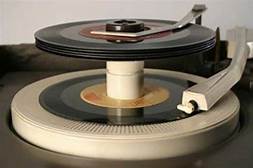 Not only that, but in introducing the 45, RCA also introduced a new type of proprietary turntable which the company hoped, would force people to upgrade their music equipment in order to play the disc at 45 revolutions per minute.

The 45 was cheap to produce with prices starting at 65 cents.