The Leader of the Federal New Democratic Party is set to release a memoir that is not a political book, but rather is billed as a story about `how strengthening the connection between us all is the way to build a better world. 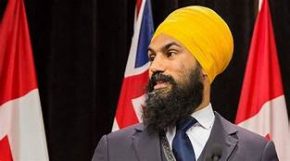 The book follows Jagmeet Singh, who is Sikh, from his childhood as he learns lessons about overcoming adversity and the impact of not belonging.

The book is called “Love and Courage,” which alludes to the author’s oft-invoked call for “love and courage,” which he deployed in a viral response to a heckler at a 2017 NDP leadership campaign event.