CHILINA BRINGS CAROLE BACK TO TORONTO

Canadian actor and singer, Chilina Kennedy is returning to Toronto for an exclusive 4 week run of “Beautiful: The Carole King Musical”. 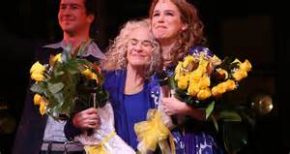 The New Brunswick-born Ontario-trained actress, who lives in New York but calls Toronto home, has been playing Carole King on Broadway for the past 4 years, brings the show to Toronto’s Princess of Wales Theatre April 9th to May 5th.

Kennedy previously took a brief hiatus from the Broadway company to headline the show in Toronto in the summer of 2017.

The show recently celebrated its fifth anniversary on Broadway at the Stephen Sondheim Theatre where it has broken all box office records and is the highest grossing production in that theatre’s history.