“What has happened here is an extraordinary and unprecedented act of violence,” said New Zealand Prime Minister Jacinda Ardern, who calls it one of New Zealand’s darkest days. 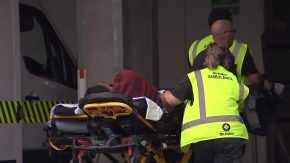 One man was arrested and charged with murder in what appeared to be a carefully planned racist attack. Police also defused explosive devices in a car. Two other people were being held in custody.

New Zealand National Police Commissioner Mike Bush says the suspects were not known to law enforcement in New Zealand or Australia before the attack.

Authorities have not specified who they detained, but say a man who claimed responsibility for the shootings left a 74-page anti-immigrant manifesto in which he explained who he was and his reasoning for the attack. He said he was a 28 year old white Australian and a racist.

New Zealand’s national security threat level was being raised to the second-highest level. But the police commissioner Mike Bush says lockdowns have been lifted in the area of the shootings.

It has since been taken down, but a live stream of the shootings in a 17 minute video, was posted on Facebook, apparently by the shooter.

International reaction has been swift.

France has increased security at mosques, London’s mayor says the mosque attacks are “heartbreaking”, Spain’s prime minister has offered condolences and a German cabinet minister condemns the mosque shootings as a “brutal crime.”