Corey Hart says there is a special significance to his induction into the Canadian Music Hall of Fame at this Sunday’s Juno Awards in London, Ontario.

Nearly 26 years ago, the 1980s hitmaker met his future wife on the Junos’ stage. 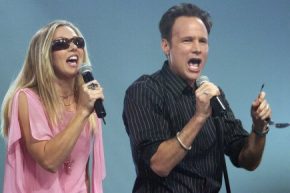 Quebecois singer Julie Masse presented an award with Hart all those years ago, which he says led to them working on her album together and eventually falling in love.

“There’s an empathy and an understanding that only another artist can relate to. We’re very sympatico together. There’s no friction, there’s no tension,” explained 56 year old Hart.

Corey Hart will perform some of his hits on the Junos broadcast, with Masse appearing as one of his back-up singers.