There are new developments in the fallout from the Ethiopian Airlines crash on Sunday.

The first Canadian airline has moved to ground it’s Boeing 737 Max 8 jets; the same plane that was involved in the Ethiopian Airlines disaster as well as a crash in Indonesia this past October. 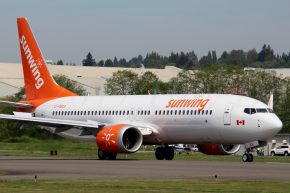 Sunwing Airlines has released a statement saying their four 737 Max 8 jets are being grounded, not for safety reasons, but because of airspace restrictions on the plane imposed by some of Sunwing’s partner destinations.

Earlier Tuesday, Air Canada was forced to cancel some flights to London, after Britain banned the Max 8 from its airspace. And a spokesperson for Air Canada says cabin crew concerned about working on the Max 8 can apply to change their flights on a case by case basis.

Transport Minister Marc Garneau is set to offer an update Wednesday morning, but on Tuesday, he reiterated there are no plans to ground Canada’s fleet of these jets.

“Why take a chance with the travelling public? Why compromise the integrity and confidence of the travelling public in an airplane? And I agree that all of these planes should be grounded for the short term,” Rosenberg explained. Here Arthur Rosenberg’s conversation with Libby Znaimer by clicking here.

Airline pilots on at least two U.S. flights have reported that an automated system seemed to cause their Boeing 737 Max 8 planes to tilt down suddenly.

The pilots said that soon after engaging the autopilot on the Max 8, the nose tilted down sharply. In both cases, they recovered quickly after disconnecting the autopilot.