The Vatican’s former finance minister has been sentenced to six years in prison for molesting two choirboys in a Melbourne, Australia in the 1990s. 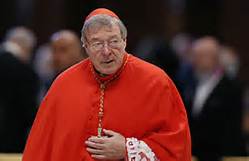 Cardinal George Pell is the most senior Roman Catholic clergyman to be convicted of child sex abuse so far in a scandal that has rocked the church world-wide.

Chief Judge Peter Kidd said Pell’s conduct was permeated by staggering arrogance and recognized this in fact could be a death sentence for the 77 year old prelate.

Pell denies the allegations and is appealing the conviction.