A Toronto doctor who treated victims of last years mass shooting on Danforth Avenue has become the target of a national firearm lobby. 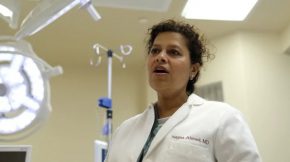 The Canadian Coalition for Firearm Rights is asking members to speak out against Doctor Najma Ahmed, who has now had dozens of complaints filed against her

Ahmed is a member of the group Canadian Doctors for Protection from Guns who formed in February to push for the passage of Bill C-71 which would reform Canada’s firearm laws.

The lobby group say she was singled out as she is the public face of the campaign and posted a ”call to action” urging members to file complains against Ahmed, even if they had never been a patient of hers.

The College of Physicians and Surgeons of Ontario, who have received the complaints says a committee is conducting a review and will determine whether to investigate further or designate the complaints as ”frivolous.”