Toronto Fire Crews have been battling a difficult five-alarm blaze that broke out at a basement unit at 160 Bathurst Street just before 5:30am Monday. 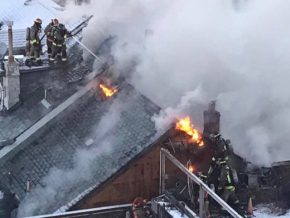 According to Toronto Fire, the blaze spread through the roof to neighbouring buildings.

Two people were rescued from the basement by firefighters. One has died, while the other is in serious condition, said Toronto Police. 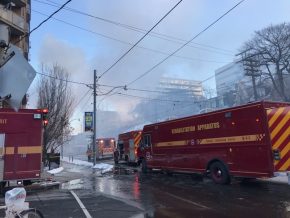 “Crews are having a tough time. This is a difficult fire,” Toronto Fire Chief Matthew Pegg told reporters at the scene. “There is a heavy volume of fire inside and you can see by the design and location of the building, there are exposure buildings on either side.”

Heavy, thick smoke could be seen billowing from the building as firefighters worked to contain the blaze. While firefighters initially entered the building to combat the flames, they were ordered to retreat because of the dangerous conditions

Some 13 trucks and 50 firefighters were at the scene.

Toronto Fire is advising people to avoid the area if they don’t need to be there. Pegg said hydro is being shut down to parts of the area because of the fire and some nearby residents could experience power outages.

The cause of the fire is not yet known.