Premier Doug Ford is defending a fundraising Gala  being hosted by his Conservative Party in Toronto on Wednesday night. 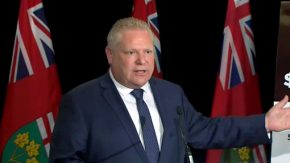 The event, dubbed the 2019 Leader’s Dinner is charging $1,250 a plate and comes after the Tory government changed fundraising rules to once again allow the premier and cabinet ministers to attend these type of events.

The event is facing strong criticism from the opposition parties who have suggested the gala is a return to cash-for-access events and is bad for democracy.

The Premier was quick to dismiss the concerns however, saying the Tories also host $25 spaghetti dinners across the province that anyone can attend.

Ford is set to deliver the keynote speech at the event.