Another Canadian musical artist is about to impact Broadway. 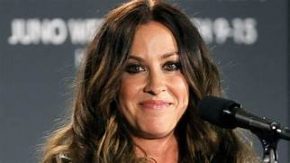 “Jagged LIttle Pill” the musical, basic on the 1995 album of the same name by Ottawa’s Allanis Morisette, is headed to the Great White Way

The theatre, cast, and date of the show’s opening have not yet been announced but one version of it debuted with a sold-out, 10-week run in Cambridge, Massachusetts.  It’s being revised as it heads for Broadway and is expected to open in New York this fall.