MAY TO FACE NON-CONFIDENCE VOTE THIS AFTERNOON

Theresa May’s Conservative Government is facing a non-confidence vote after her Brexit divorce deal was crushingly rejected 432 to 202 by Members of Britain’s House of Commons. 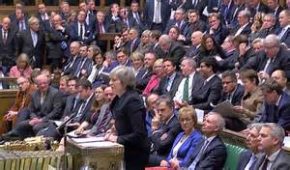 If she survives, May will have three days to deliver a new divorce deal.

The non-confidence vote is expected around 2 p.m. (EST) this afternoon.