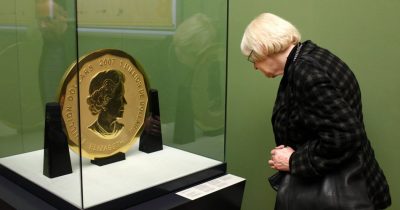 A trial has begun in Germany for four young men accused of stealing a 100-kilogram Canadian gold coin – from a museum in Berlin two years ago.

Prosecutors allege that in March of 2017, the suspects smashed a protective case containing the “Big Maple Leaf” at the Bode Museum – lifting it out a window – and taking off with their haul in a wheelbarrow.

They’re accused of cutting up the coin – worth about 5.3-million dollars – and selling the pieces.