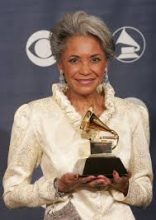 Wilson was influenced by legends like Dinah Washington and Nat “King” Cole and covered everything from jazz standards to “Save Your Love for Me.”  In the 1960’s she released eight albums that reached the top 20 on Billboard charts.

Over her career she recorded more than seventy albums and won three Grammy Awards.