Zoomer legend Carole King has come out of retirement to write an anti-Donald Trump song. 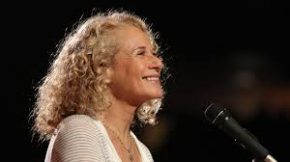 The song is a reworked version of her 1977 hit “One” and is King’s first new music in seven years.

The 76-year old multiple Grammy winner, who is also a staunch Democrat, says the new version of “One” is a call to action ahead of next week’s U-S mid term elections.  She adds, she hopes it empowers people.