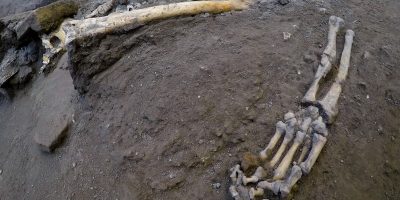 It’s described as “a shocking find – but also very important for history.”

Recent excavations in the ancient buried city of Pompeii – have uncovered the skeletons of people who took refuge from the violent eruption of Mount Vesuvius – in A.D.79.

The director of the archaeological site, Massimo Osanna, tells the Italian news agency ANSA – that the skeletons were still intact – and were left undisturbed – despite widespread looting at the site centuries ago.

The bones are believed to be those of two women and three children. They were found in a small room in a house where there was a charcoal inscription that historians say dates the deadly eruption to October – two months later than previously thought.