Toronto Mayor John Tory begins his second term with a much smaller city council, slimmed down by Premier Doug Ford from 47 to 25 wards. 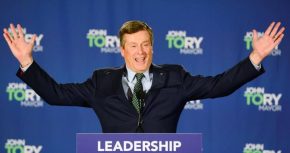 Of the 25 who won council seats, 21 are incumbents, who in most cases ran against other longtime Toronto politicians. Thirteen city councillors are not returning.

Incumbent Frances Nunziata has been re-elected, James Pasternak remains a councillor, as does Anthony Peruzza who beat out fellow incumbent Giorgio Mammoliti.

Ana Bailao is on council again as are Joe Cressy and Mike Layton.

In the hotly contested riding of Ward 12 Toronto-St. Paul’s, Josh Matlow returned with a win over veteran councillor Joe Mihevc.

Matlow said after his win, he hopes Joe Mihevc will continue his long time work as a social justice warrior.

But longtime councillor and former deputy mayor Norm Kelly is out, losing to incumbent Jim Karygiannis.

In Scarborough-Guildwood Paul Ainslie has won re-election, with newcomers Cynthia Lai and Jennifer McVie rounding out the 25 wards.