Ontario’s Auditor General is claiming she was “lied to” by the Wynne Liberals over the Fair Hydro Plan. 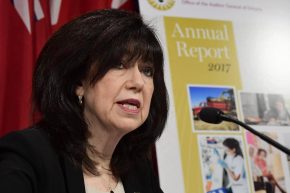 Bonnie Lysyk sat Monday before members of the Select Committee on Financial Transparency, who are looking for answers into the former government’s accounting practices and what the new governing Progressive Conservatives say was a hidden $15-billion debt.

Lysyk referred to the accounting practices of the Kathleen Wynne Liberals as “bogus” and added she’s “never seen a situation like the ones encountered in the past couple of years.”

Lysyk described the impact of the Fair Hydro Plan on the province’s net debt as “up there close to a 10” on a scale of 1 to 10.

The committee was established after a report released by Ontario’s Independent Financial Commission of Inquiry in September.

The commission assessed and found issues with the previous government’s accounting practices. The report recommendations included the suggestion that the provincial government establish public transparency as a top priority in the financial reports.

Tuesday, a number of senior public servants in the Wynne government are scheduled to appear before the Select Committee.

Committee members began their work on October 3rd. They are expected to have a final report presented to the Ontario legislature by December 13th.