The wedding of Princess Eugenie has taken place this morning. 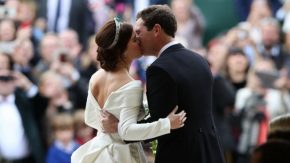 They exchanged their vows at St. George’s Chapel, where months ago her first cousin Prince Harry married Meghan Markle in a global sensation.

The bride is ninth in line for the British throne. She wore a gown by British designers Peter Pilotto and Christopher De Vos. She also wore a diamond and emerald encrusted tiara loaned to her by her grandmother.

Queen Elizabeth and Prince Philip attended the wedding, along with Prince Charles, Prince William, Prince Harry and other senior royals.