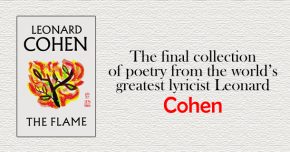 The 2015 poem is a point-counterpoint narrative focused on the boastful nature of the hip-hop star, who once declared onstage; “I am Picasso.”

Poems in The Flame were selected and ordered by Cohen himself and are the final volume of literary works from the distinguished Montrealer who died in November 2016.

In the foreword, Leonard’s son Adam Cohen writes that the volume
was what he was staying alive to do, his sole breathing purpose at the end.”

Listen for The Leonard Show at 4:30pm on both Saturdays and Sundays on Zoomer Radio (AM 740 and 96.7FM in downtown Toronto).