History has been made in Quebec as the seven year old CAQ party won a majority in yesterday’s provincial election.

Coalition leader and premier-elect Francois Legault has ended nearly a half century of two party political rule between the Liberals and the Parti Quebecois. He also reached out to english-speaking Quebecers at his victory party in Quebec City. 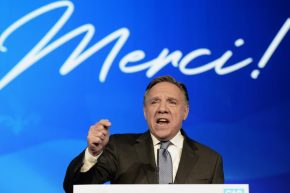 “Let’s work together to make Quebec stronger within Canada, and I want to assure you that my government will be your government,” Legault said to a cheering crowd.

As for Outgoing Liberal premier Philippe Couillard, he congratulated Legault for an election win that was
complete and without ambiguity.”

The former neurosurgeon said he will leave the premier’s office with his head held high, knowing he has left the province in better shape than when he entered office in 2014.