ARETHA FRANKLIN MUSEUM MAY GO AHEAD IF EXHIBIT A SUCCESS 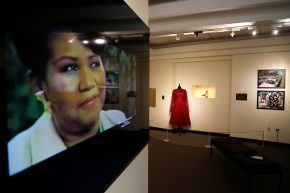 Among the items on display are the first record Franklin cut in Detroit and the red shoes she wore during one of the viewings.

Franklin’s niece, Sabrina Owens, says her aunt used to talk about having a Franklin family museum. She says it’s “not on the immediate horizon,” but the family will watch the public response to the exhibit to see if it’s possible.