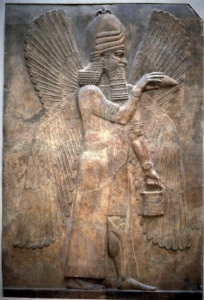 A 3,000 year old Assyrian relief carving – featuring a figure known as The Winged Genius – will go to auction at a Christies antiquities sale in New York on October 31st.

The work is being sold by The Virginia Theological Seminary in Alexandria – and has a pre-sale estimate of between $10 million and $15 million.

The proceeds are meant to underwrite a scholarship fund.

The gypsum relief is over seven feet tall – and once adorned the walls of the north-west palace of a King at Nimrud – in what is now Iraq.

The large piece was acquired in Mosul in 1859 by an American missionary named Henri Byron Haskell – and is one of the earliest ancient artworks sent to the U.S.

Haskell bought the work for $75 from English archaeologist Sir Austen Henry Layard – who excavated the royal palace at Nimrud – and the price included fees for shipping the relief to Virginia.

The ancient relief has been housed at the seminary there since 1860.