Toronto’s mayor says he’s confident the municipal election can be held on October 22nd, despite word Thursday from the city clerk who declared it “virtually impossible to carry out the vote as scheduled.”

John Tory made his comments as he rallied his campaign volunteers Thursday night.

“I think it’s important we have the election on October 22nd, and because we have so many things to do, we have transit to get built and we have a budget to bring forward, and we haven’t had a council meeting with regular business since July, so I think people still want to get on with this, I’m confident our team can do that,” Tory explained. 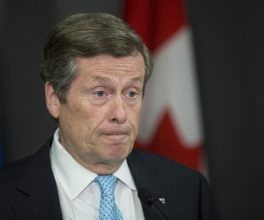 Earlier in the day, Toronto city councillors held an emergency meeting to decide on next steps in the face of a renewed bill at Queen’s Park which reduces the size of council from 47 to 25 wards.

They voted in favour of directing the city solicitor to challenge the provincial bill and to ask the federal government to disallow it. As recently as Thursday, Prime Minister Trudeau reiterated that won’t be happening.

“As I said, I am disappointed the provincial government chose to make this decision to override people’s rights and freedoms, but at the same time I’m not going to weigh in on the actual debate over the size of the municipal governments in Ontario, in Toronto. I don’t think that’s a role the federal government needs to take on,” Trudeau explained.

Meantime, a rare Saturday sitting of the Ontario legislature will take place this weekend as Premier Doug Ford and his governing PC’s try to speed up passage of the so-called Efficient Local Government Act.