Canada’s Foreign Affairs Minister is joining the chorus of international condemnation over the conviction and sentencing of two reporters in Myanmar. And Chrystia Freeland is calling for their immediate release. 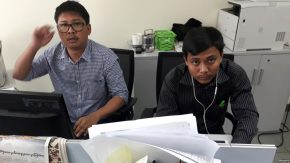 The Reuters journalists were covering the Rohingya crisis and were caught up in what many are describing as trumped-up charges.

Freeland, who once worked for Reuters herself, says Canada will use every opportunity to stand up for human rights and freedom of expression.

She says the verdict “seriously jeopardizes” the idea of democracy in Myanmar, which requires journalists to report facts without fear of retaliation, violence or imprisonment.

The two reporters have been sentenced to seven years in prison for illegally possessing government documents.