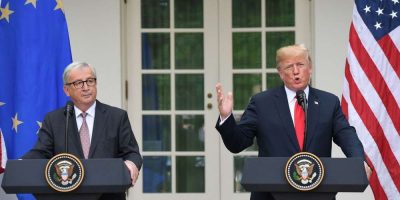 Other Republicans also welcomed the development – amid months of growing unrest in Congress about the administration’s trade policies.

European Union Commission President Jean-Claude Juncker says he has made a deal with President Donald Trump – and during a joint Rose Garden appearance with Trump that he “had the intention to make a deal today and we made a deal today.”

Juncker says after a lengthy meeting with Trump that the EU has decided to increase imports of American soybeans – and liquefied natural gas – and as long as negotiations are ongoing, “We will hold off further tariffs” and reassess existing tariffs on steel and aluminum.

President Trump says the United States and the European Union have agreed to work toward “zero tariffs” and “zero subsidies” on non-automobile goods.

He declared it a “very big day for free and fair trade.”