After a daylong debate at Toronto City Hall, city councillors voted Tuesday night to approve a $44-million plan to combat a recent spike in gun violence. 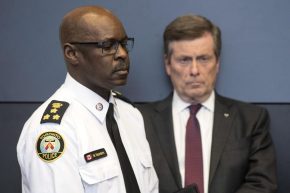 The five year plan includes the controversial listening technology called ShotSpotter, which was requested by Toronto Police Chief Mark Saunders and is said to be able to detect the sound of gunshots and report it in real time to police.

“A significant investment in community programs help families and kids and neighbours to deal with and reduce and reduce frankly the opportunity and the inclination that anybody might have to pick up a gun or have anything to do with a gun,” Mayor John Tory explained after the vote, “Secondly, we approved a very strong statement about banning handguns and urging other levels of government to ban handguns.” Tory asks why would anyone in the city of Toronto need to have a handgun.