Ontario’s NDP Leader has officially launched what she’s promising will be the biggest campaign in her party’s history. 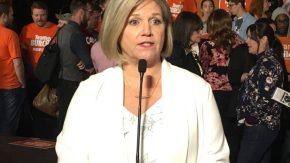 Andrea Horwath was nominated as the New Democrat candidate in her riding of Hamilton Centre at an event on Sunday.

“Imagine a place where hydro is public and we pay less for it, where no one skips their medication because they can’t afford it, a place where everyone can get dental care, new graduates have less debt and more opportunity and seniors can live in dignity,” Horwath explained to supporters.

The NDP’s platform promises free child care for families earning less than $40,000 annually, and a boost to hospital budgets, along with access to dental care and universal pharmacare for all Ontarians.

The June 7th provincial election will mark her third as Ontario NDP leader.